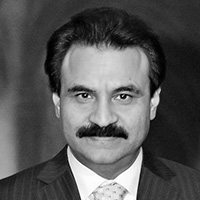 Dr. Ankush Oberai is an innovator and executive who sits at the intersection of academia, technology and business. He is best known for the success of Knights Technology, which is the leader of the global semiconductor failure analysis market.

In 1989, Ankush co-founded Knights Technology, which launched a multi-billion-dollar market segment of productivity and cost savings for semiconductor fabs. He led Knights Technology through four acquisitions; the first to Electroglas (EGLS), then to FEI Company (FEIC), followed by Magma Design Automation (LAVA) which was then acquired by Synopsys (SNPS). Ankush currently serves as Senior Group Director for Fab Yield and Failure Analysis Products at Synopsys.

Ankush holds several patents in the field of Semiconductor Failure Analysis and IC Manufacturing. He sits on the Dean’s Advisory Board of the UCF College of Engineering and Computer Science; he also serves as an advisory board member to various technology companies.